The Russian Arts Theater & Studio Presents: The Great Nothing

Freely based on Anton Chekhov's Swan Song, The Great Nothing (Про Великое Ничто).

The Russian Arts Theater and Studio

*PLEASE NOTE THIS SHOW IS PERFORMED IN RUSSIAN*

The Russian Arts Theater and Studio is pleased to announce acclaimed Russian stage director Aleksey Burago is following his sold-out performances of My Uncle Chekhov at the historic Balcony Theater with The Great Nothing (Про Великое Ничто) a comedy to be performed in Russian by a renowned cast including Ernst Zorin (Honored Artist of the Russian Federation, Vakhtangov Theater), Gala Orlovsky (Prominent Artist of Ukraine Citation) and Sergey Nagorny.

The production is headed by one of Russia's most talented directors, Aleksey Burago, a former protege of Pyotr Fomenko and famous for his work at the Hermitage Theater and Aleksandrinka Theater (Beyond Recognition), Moscow TV (Queen of Spades), Youth Theater (The Emperor's New Clothes, Stoned), Interatelier Theater (Fandor and Liz), and The Baltic House Theater (Camille). Among his productions in New York are Chekhov's Uncle Vanya, The Seagull, The Bear, and Lady with a Lapdog, with Jokes and a Happy Ending.

With humor and wit, The Great Nothing s a love letter dedicated to the theater. Enter the stage door and embark on a journey with four actors as they pay homage to Russian show business, its' rosy illusions, backstage romances, and battling egos. Freely based on Anton Chekhov's Swan Song, the story revolves around Svetlovidov, a faded star torn between ambition and exhaustion. The plot unwinds over the course of one evening following a banquet in honor of the aging actor, where he learns the director and the stage manager are planning to replace him in the next production. In the hours and minutes leading up to the performance, clashes quickly take place, and soon, easier consolations are found inside the vodka bottle. A satire intertwined with improvisations, dreams, and secret jokes that have survived countless generations at the stage wings, this delicious portrait of the world of theater is not to be missed.

Leading the cast is legendary actor Russian actor Ernst Zorin, who has worked over twenty years with the world famous Vakhtangov Theater, appearing in numerous productions including the sensational Princess Turandot. Co-star Gala Orlovsky has toured throughout the world in her work as a stage actress. A recipient of the Debut of the Year Award for her portrayal of Pippi Longstockings, Gala was also awarded the First Prize in Ukranian National Theatrical Festival for her role in Save me from Hatred (by Alexander Galich) and Golden Lion Award for best female role in Birdcatcher's Fun. The cast also features Sergey Nagorny, one of the brightest stars of a new generation of Ukrainian-American actors. Last seen on stage in STEPS' Ask Joseph, Nagorny has also made a recent appearance on CBS' hit drama Limitless. His extensive theater work with New York's Lost & Found Project include King of Chelm, Knock, and the award-winning production of Covers.

Recommended for audiences of all ages. Please note this production is performed in Russian.

The Great Nothing plays the following regular schedule through Saturday, March 19th.

More information and tickets available at:

GALA ORLOVSKY, recipient of the Prominent Artist of Ukraine Citation 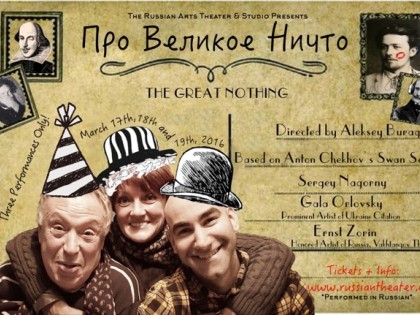