The Russian Arts Theater and Studio return with the work of Nikolai Gogol.

The work of Nikolai Gogol, the strangest genius Russia has ever produced, comes to life in The Russian Arts Theater and Studio's production of Avenue of Wonder. Internationally renowned Russian director Aleksey Burago directs this dark comedy featuring an ensemble of six actors. Based on the short story Nevsky Prospekt, this production will also re-inaugurate the historical Balcony Theater at West Park Presbyterian Church, formerly home to the Shakespeare Center and the Riverside Shakespeare Company.

The production is headed by one of Russia's most talented directors, Aleksey Burago, a former protégé of Pyotr Fomenko and famous for his work at the Hermitage Theater and Aleksandrinka Theater (Beyond Recognition), Moscow TV (Queen of Spades), Youth Theater (The Emperor's New Clothes, Stoned), Interatelier Theater (Fandor and Liz), and The Baltic House Theater (Camille). Among Burago's productions in New York City are Ah, My Dear Andersen (Time Out NY Critic's Pick), Wonder Bread (Winner of Best Solo Show Award at The International United Solo Festival 2010), Uncle Vanya, The Seagull, The Bear, Lady with a Lapdog, with Jokes and a Happy Ending and most recently, the sold-out production of My Uncle Chekhov.

One evening, while strolling along Nevsky Prospekt, the central avenue that remains to this day the main artery of St. Petersburg, a distraught artist and a brazen lieutenant encounter a mysterious prostitute and a young housewife. In their separate pursuits of the women through the labyrinths of side streets, courtyards and winding staircases, both men come to realize all is not what it seems on the glittery avenue. As the rational plane of life slant beneath their feet, these comic and self-deluding characters soon discover that between everything ordinary there is a crack and deep in the shadows, peering up, are the maddening fantasies of the human soul. This February, join the cast of The Russian Arts Theater & Studio at the historic Balcony Theater and experience the strange genius of Nikolai Gogol.

Adapted and Directed by: Aleksey Burago 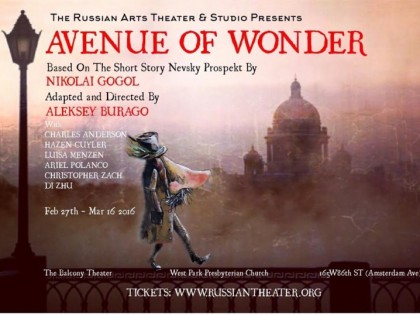