Alex Trachishin, "Life is a Gamble"

"Life Is a Gamble" is Alex Trachishin's first exhibition in New York and first presentation of a new series of works featuring gambling...

"Life Is a Gamble" is Alex Trachishin's first exhibition in New York and first presentation of a new series of works featuring gambling, a theme widely explored in Russian literature especially by classic writers such as Pushkin and Dostoyevsky, but which has rarely become a subject of fine art.

At the same time gambling has evoked a long tradition of artistic expression, from ancient Greek vase drawings of dice games to Cezanne's card players. In the 1970's, American artist LeRoy Neiman, unique in his own right by his interest in the theme of gambling in his art, published a history of artworks united by this theme.

Alex Trachishin discovered his artistic interest in the theme of gambling during his first years in the United States. After coming to the US he made his living working in casinos. Two years ago when he showed me his paintings for the first time, I encouraged him to work with what he really knows.

For Trachishin the world of gambling is mysterious and energetic, encompassing all the gamma of emotions and human expressions, which exist. Nowhere but in a casino can you find happiness, surprise, distress, sorrow, nervousness, hypnosis and addiction simultaneously. Trachishin sees in gambling the duality of self-abandonment submerging into a world of play, different from everyday life. But it is real because you either pay up or are rewarded out of it and crossing the threshold into reality once again is sometimes a very dramatic.

Trachishin is familiar with both sides of this world: as a croupier and a player. He knows all the games and the category of people who play them. He knows that craps attracts more aggressive people, predominantly men, roulette, women. Black jack is the most popular game in the United States.
In the casino where even photography is prohibited, the artist cannot do any sketches but must study his characters deeply, which enables him to create emotional paintings devoted to human passion.

This exhibition is made possible with public funds from the New York
State Council on the Arts, a state agency, and Dynamo Development Co. 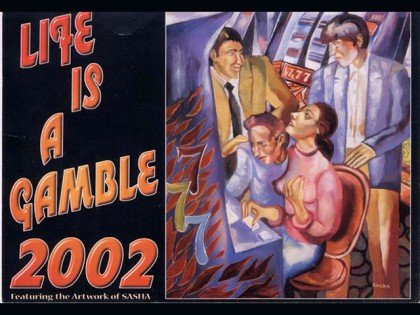