Kandinsky at the Guggenheim Museum

This exhibition is the first full-scale retrospective of Kandinsky’s career in the US since 1985 and offers a comprehensive chronological survey of the artist’s work...

For RACC MEMBERS AND FRIENDS!:
Kandinsky

The Solomon R. Guggenheim Museum is currently celebrating the 50th anniversary year of its landmark building designed by Frank Lloyd Wright, which first opened to the public on October 21, 1959. At this exciting time in its history, the Museum would like to extend to patrons of the Russian American Cultural Center an invitation to the current Kandinsky exhibition. This exhibition is the first full-scale retrospective of Kandinsky’s career in the United States since 1985 and offers a comprehensive chronological survey of the artist’s work through a selection of his most important canvases. Kandinsky - a visionary artist, theorist, and abstraction pioneer - is a central figure in the history of the Guggenheim. His works not only represent a part of the core and essence of the museum’s collection, but also helped to inspire the creation of Wright's building.

Kandinsky at the Guggenheim Museum 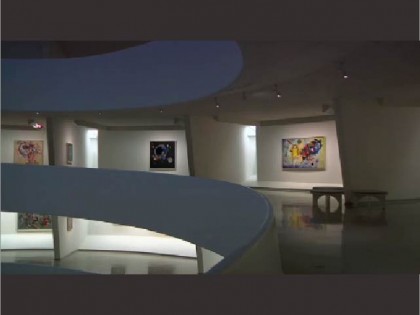