The Russian American Cultural Center (RACC) is pleased to announce the opening of its new exhibition "Favorite Portraits of People in the World" by Valera and Natasha Cherkashin. 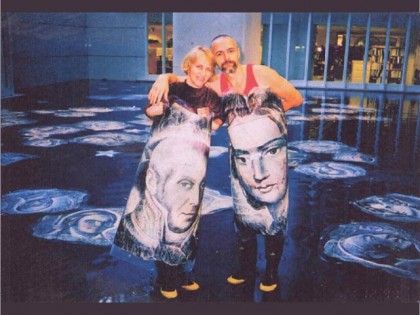 The Russian American Cultural Center (RACC) is pleased to announce the opening of its new exhibition "Favorite Portraits of People in the World" by Valera and Natasha Cherkashin. These internationally recognized artists, photographers, performers, and lecturers from Moscow are no strangers to RACC. Curator Regina Khidekel has included the works of the Cherkashins in some of the most famous shows of Russian and American artists that have taken place in the USA, including "It's the Real Thing: Soviet and Post-Soviet Sots Art and American Pop Art" (1998) and "DUMBO Double Deuce" (2001).

Last year in November 2001, in an effort to strengthen the spirit of our city, the Russian-American Cultural Center reopened its gallery in Lower Manhattan next to the wounded, still-smoking area of the World Trade Center with Valera & Natasha Cherkashin's exhibit "Mirages of Empires".

It is significant that the new exhibit will take place at the Empire State Building's Fleet Bank location. It touches upon two major themes of the Cherkashin's works: "Mirages of Empires" (1995), which illustrates through architectural landmarks the way national monuments have reflected history and shaped the culture of great nations, and "Favorite Portraits of People in the World" (1998), which centers around vanishing icons - monetary units of old Europe. Decorated with portraits of great personalities, these national currencies are truly masterpieces of art. Now being out of business, these antiquated bank notes are used to create new art objects with the goal of restoring some their value. The installation covers the transition from old monetary units as it blends into the use of the single European faceless currency, the Euro.

The purpose of working with historical, controversial issues is to create a nostalgic and romantic commemoration of epochs that have passed and empires that have vanished. While living in Moscow, the Cherkasins have strong connectictions with New York, constantly contributing new works to their New York Streets series (1994-2002).Some of these works (1996)including World Trade Center will be presenteed at the exhibition. These images have a strong documentary flavor achieved by the use of specially treated materials: photos and newspapers, which have been manipulated, crushed, drained, painted gold, or silver, and overlaid with images.

This exhibition is made possible with the public funds from the New York State Council on the Arts, a state agency, City of New York Department of Cultural Affairs. Special thank to Mr. Peter T. Gemignani, Fleet Bank