RACC members are kindly offered a $3 ticket discount — $3 off regular prices at Angelika Film Center (AFCNY) to any screening, including a WOM screening on April 28 at 7pm and all opening weekend screenings. 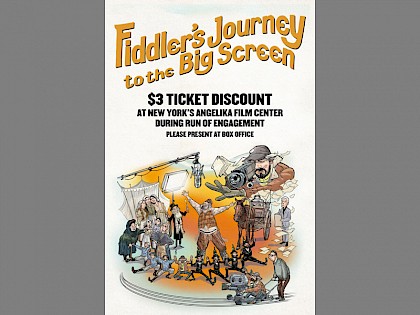 Fiddler's Journey to the Big Screen officially opens at the Angelika Film Center (18 W Houston St, New York, NY 10012) on Friday, April 29th. RACC members are kindly offered a $3 ticket discount — $3 off regular prices at Angelika Film Center (AFCNY) to any screening of Fiddler's Journey to the Big Screen, including a WOM screening on April 28 at 7pm and all opening weekend screenings. Important: Discount tickets can only be purchased at the box office. The discount offer is not applicable to online sales.

Oscar-nominated director Daniel Raim as well as actresses Neva Small (Chava, in 1971 film), and Rosalind Harris (Tzeitel, in 1971 film and on Broadway in 1967) will be in person at the 7:25pm screenings on Friday, April 29th and on Saturday, April 30th. There will be a post-screening Q&A after each of those screenings, moderated by film critic Jan Lisa Huttner who is the author of Diamond Fiddler: New Traditions for a New Millennium.

RACC is pleased to promote this landmark event for our community, the first large-scale successful English-language production on Broadway about Jewish life in the Russian Pale of Settlement, based on Yiddish writer and playwright Sholom Aleichem's stories about Tevye the Milkman.

BIOS FOR IN PERSON TALENT

Oscar-nominated filmmaker Daniel Raim is the director of Fiddler's Journey to the Big Screen. Daniel Raim is known for his documentaries about overlooked artists of Hollywood's Golden Age, including "The Man on Lincoln's Nose" nominated for the 2001 Academy Award® for Best Documentary Short Subject. Raim's 2015 doc "Harold and Lillian A Hollywood Love Story" (a New York Times Critic's Pick) premiered as an Official Selection of the Cannes Film Festival and was nominated for The Golden Eye (L’Œil d'or, le prix du documentaire - Cannes).

Jan Lisa Huttner is an American film critic, journalist, activist, and independent scholar who has been published in many prominent media outlets. She is the author of Tevye's Daughters: No Laughing Matter, and Diamond Fiddler: New Traditions for a New Millennium as well as being a story consultant and appearing in the 2019 documentary Fiddler: A Miracle of Miracles.

TRAILER for Fiddler's Journey to the Big Screen HERE

Fiddler's Journey to the Big Screen is an engrossing and exuberant documentary that is an intimate portrait of Norman Jewison as well as a deep dive into the nuts and bolts of moviemaking.

The fall of 2021 marked the 50th anniversary of the "Fiddler on the Roof,"directed by Norman Jewison. In 1972, it was nominated in eight Academy Award categories and won three Oscars. It is the film Pauline Kael (The New Yorker) called "the most powerful movie musical ever made."

Oscar-nominated filmmaker Daniel Raim’s documentary Fiddler's Journey to the Big Screen, narrated by Jeff Goldblum, explores how the experience of making Fiddler deepened Jewison as an artist and revived his soul.

A Zeitgeist Films release in association with Kino Lorber.