Who Killed Andrei Warhol is an absurdist tragicomedy that imagines a friendship between pop artist Andy Warhol and a straight-laced Soviet Ukrainian journalist who arrives in New York at the height of the garbage strike in early 1968 to cover the impending American Revolution. As the journalist, Sasha Ivanov, struggles to understand life in New York, he decides that his fellow Ukrainian worker, "Andrei" Warhol, is a Socialist Realist painter, a proletarian genius, and a passionate Leninist. Ivanov also has an affair with Warhol's would-be assassin, Valerie Solanas, and gets implicated in intrigues involving the FBI, the KGB, the Communist Party USA, the Black Panthers, and the Students for a Democratic Society.

Advance praise for Who Killed Andrei Warhol:
Askold Melnyczuk, author of Ambassador of the Dead
"All fiction is by nature revisionist and Motyl's surprising and ingenious novel, Who Killed Andrei Warhol, adds several dimensions to our understanding of this American icon, blazing new avenues of approach to a subject whose object was cultural depletion."

Dzvinia Orlowsky, author of A Handful of Bees
"With wit and great energy, Motyl invites us to reconsider the heroic forces that shaped Andy Warhol's life and work as witnessed through Communist comrade Sasha's eyes. After reading this book, I don't think I'll ever look at a Warhol painting quite the same way."

Gloria Mindock, editor, Cervena Barva Press
"This novel is a riveting 'Warholian' masterpiece. The diary takes the reader to the emotional inner conflict of Ivanov, who needs to decide where his loyalty lies. Written with such a sophisticated take on Ivanov, Alexander J. Motyl proves he is a writer to watch."

Casey Dorman, author of I, Carlos
"Who Killed Andrei Warhol will delight readers with its humor, its ability to capture the zeitgeist of America in the late 1960's, and its highly entertaining examination of the contradictions and absurdities of Eastern and Western outlooks on the world."

Who Killed Andrei Warhol may be ordered directly from Seven Locks Press (www.sevenlockspublishing.com) as well as from Amazon.com and BarnesandNoble.com. 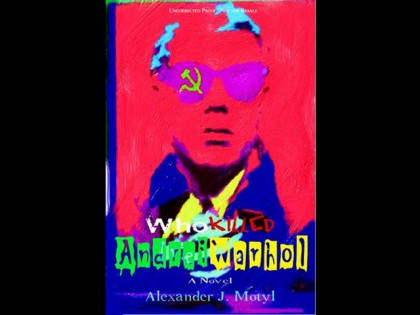