Homage to the memory of Aleksandr Galich at 90, with words by Drs. Gene Sosin and Gloria Donen Sosin, who both knew Galich personally.

Homage to the Memory of Aleksandr Galich at 90

A special event dedicated to the memory of Aleksandr Galich, the influential dissident "guitar" poet who was one of the three outstanding masters of this genre - along with Bulat Okudzhava and Vladimir Vysotsky. Drs. Gene Sosin and Gloria Donen Sosin, both writers and specialists in Russian literature, who knew Galich personally - he was a colleague of Gene's at Radio Liberty in the 1970s, will describe their travels with him in the U.S. and Israel after he left the Soviet Union. They will also present a DVD film produced in Moscow in 1988. In addition to showing Galich performing several of his songs and excerpts from films for which Galich wrote the scenarios, the film includes short interviews with his friends: Andrei Sakharov, Elena Bonner, Andrei Sinyavsky, Viktor Nekrasov and other members of the cultural elite.

Galich died in Paris in 1977 and is buried in the Russian Orthodox Cemetery, Ste. Genevieve de Bois, south of the city. His gravestone marks his birth as October 19, 1919, although some sources say it was one year earlier. 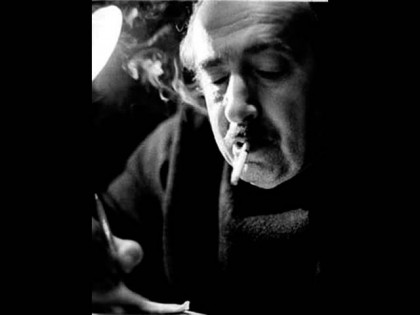