Join us for an evening that will honor the memory of Holocaust victims and affirm our hopes for a better and more humane world.

Poetry and Songs To Remember

Remember the Holocaust and its meaning for us today through the Russian and English poetry of Liana Alaverdova and Janet R. Kirchheimer, and Vasiliy Kolchenko's songs.
Join us for an evening that will honor the memory of Holocaust victims and affirm our hopes for a better and more humane world.

The program will be conducted in Russian and English.

Born in Baku, Azerbaijan, Liana Alaverdova is the author of four books. Her two books of poetry in Russian, Rifmy [Rhymes], 1997, and Immigrantskaya Tetrad' [Immigrant's Notebook], 2004 were presented on Russian TV and radio. In 2007 she published From Baku to Brooklyn, her first bilingual book of poetry. Ms. Alaverdova lives in Brooklyn and works as a librarian at the Brooklyn Public Library. She published poems dedicated to Janusz Korczak, one of the Holocaust martyrs, and translated Janet Kirchheimer's poems of the Holocaust into the Russian.

Janet R. Kirchheimer is an American poet whose work has been published in many journals. Her book, How to Spot One of Us, a collection of poems about the Holocaust and her family, received endorsements from Nobel Laureate Elie Wiesel and others. In 2007, she was nominated for a Pushcart Prize. Ms. Kirchheimer is a teaching fellow for Clal - The National Jewish Center for Learning and Leadership.

Vasiliy Kolchenko is a poet, songwriter and singer who was born and grew up in Kiev, Ukraine, and moved to New York in 1994. He is a professor of Biology at New York City College of Technology, City University of New York. Vasiliy Kolchenko plays acoustic guitar and performs his own songs in Russian and English. He was a laureate of the Bulat Okudzhava International Festival in 2007 and recorded four albums. His songs of the Holocaust blend universal themes of resistance, dignity and compassion.

Elevators access the 6th floor after 6 p.m. All programs are FREE and subject to last minute change or cancellation. 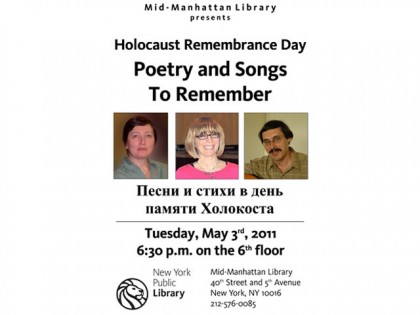