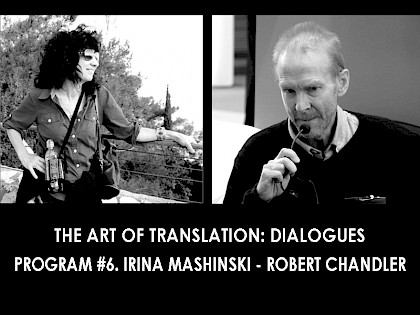 The Russian American Cultural Center presents:
The Art of Translation. Dialogues
The author and the host: Irina Mashinski
Dialogue #6: with Robert Chandler

A conversation with Robert Chandler about translation Andrei Platonov:
why Chandler  has translated The Foundation Pit twice; why it has taken him several decades to complete his translation of Chevengur; and what it means to collaborate on Platonov translations and discover, in the course of this collaboration, how very often Platonov’s apparently odd word choices are in fact deeply meaningful pointers to hidden political or religious subtexts.

Robert Chandler’s translations from Russian, mostly for NYRB Classics, include works by Alexander Pushkin and Nikolay Leskov; collections of stories and memoirs by Teffi; and novels and stories by Vasily Grossman, Andrey Platonov and Hamid Ismailov. He is the editor and main translator of Russian Short Stories from Pushkin to Buida and Russian Magic Tales from Pushkin to Platonov. Together with Boris Dralyuk and Irina Mashinski, he has co-edited The Penguin Book of Russian Poetry. He has also translated selections of Sappho and Apollinaire. He runs regular translation workshops in London. His most recent publications are Pushkin’s Peter the Great’s African and Vasily Grossman’s The People Immortal, both co-translated with his wife Elizabeth. His next publication will be Platonov’s long novel Chevengur.