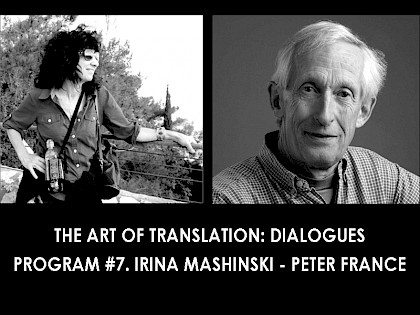 The Russian American Cultural Center presents:
The Art of Translation. Dialogues
The author and the host: Irina Mashinski
Dialogue #7: with Peter France

A conversation with Peter France about retranslation of classics, and Russian Golden Age poets,  in particular;  translating Mandelstam and how this differs from collaborative work with living poets (Aygi); collaboration with other translators (with Jon Stallworthy on Blok and Pasternak), translating  from Chuvash.

Peter France was born in Northern Ireland of Welsh parents. He is now based in Edinburgh, where he was professor of French from 1980 to 2000. A Fellow of the British Academy and of the Royal Society of Edinburgh, he has written many studies of French, Russian and comparative literature, and is the editor of the New Oxford Companion to Literature in French  and of the Oxford Guide to Literature in English Translation.. He has translated French and Russian prose texts as well as several volumes of Russian poetry – Blok and  Pasternak (both with Jon Stallworthy), Batyushkov, Baratynsky, Lermontov, Mayakovsky, Mandelstam, and Aygi.