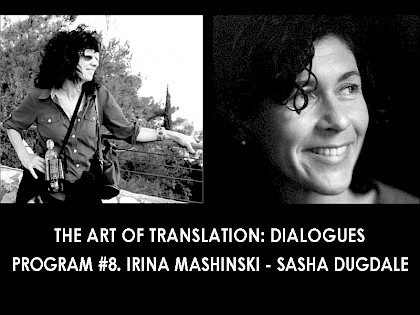 The Russian American Cultural Center presents:
The Art of Translation. Dialogues
The author and the host: Irina Mashinski
Dialogue #8: with Sasha Dugdale

Sasha Dugdale is a poet and translator. She has published five collections of poetry with the Manchester-based press Carcanet, most recently Deformations which was shortlisted for the T. S. Eliot Prize and the international Derek Walcott Prize. She has also won a Forward Prize and a Cholmondeley Award for her poetry, and she is a Fellow of the Royal Society of Literature.

Sasha Dugdale's translations include Maria Stepanova’s prose memoir In Memory of Memory which was shortlisted for a number of UK prizes after its publication in 2021, including the International Booker Prize, the Warwick Prize, the Weidenfeld Prize and the James Tait Black Prize. She has translated a number of dramatic works for stage and radio, including plays by Chekhov and the generation of playwrights who came of age after Perestroika. Most recently she translated Natalya Vorozhbyt's play about women in wartorn Ukraine, Bad Roads, which has been staged at the Royal Court and many other theatres in the UK and US. Her poetry translations include the work of Elena Shvarts and Maria Stepanova, as well as a number of translations of poets for magazines and anthologies, including Akhmatova, Tsvetaeva and Mandelstam.

Dugdale was editor of Modern Poetry in Translation between 2012 and 2017 – the magazine Ted Hughes founded for the publication of poetry in translation in 1965.