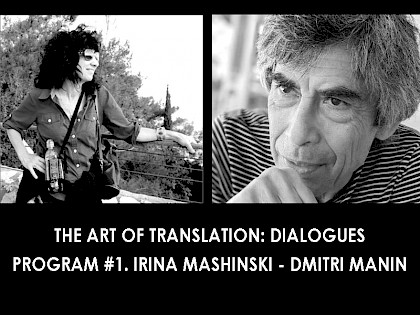 The Art of Translation. Dialogues

The author and the host: Irina Mashinski

A series of conversations in the RACC movable studio: Irina Mashinski in dialogue with masters of the ancient art of translation, as they reflect on their work.

What is translation, after all? What is the nature and the role of the ‘original’ in each particular case? And what is actually being translated? And why is it relevant now, of all times?

Dmitri Manin is a physicist, programmer, and translator of poetry. His translations from English and French into Russian have appeared in several book collections. His latest work is a complete translation of Ted Hughes’ Crow (Jaromír Hladík Press, 2020) and Allen Ginsberg’s The Howl, Kaddish and Other Poems (Podpisnie Izdaniya, 2021). Dmitri’s Russian-to-English translations have been published in journals (Cardinal Points, Delos, The Café Review, Metamorphoses, etc) and in Maria Stepanova’s The Voice Over (CUP, 2021). In 2017, his translation of a poem by Stepanova won the Compass Award competition.

Irina Mashinski was born in Moscow and graduated from Moscow University where completed her Ph.D. In 1991, she moved to the US, where she worked as a high school mathematics and science teacher and taught at universities. Irina Mashinski is the author of eleven books of poetry, essays, and translations in Russian. She is co-editor, with Robert Chandler and Boris Dralyuk, of The Penguin Book of Russian Poetry (Penguin Classics, 2015) and of Cardinal Points, the journal of Slavic literature in English (Brown University), and co-translator of Lev Ozerov’s Portraits Without Frames (NYRB Classics, 2018). Irina Mashinski is the recipient of several Russian literary awards and, with Boris Dralyuk, of the first prize in the 2012 Joseph Brodsky / Stephen Spender International Translation Prize competition. Her English-language debut, is The Naked World. A Tale with Verse (MadHat Press, 2022).