Alexander Pushkin's Little Tragedies consists of four short lyrical verse plays about human nature's inherent contradictions. The Knight-Miser, the richest man in the world discovers that money can't buy him love or the respect of his son. Mozart and Salieri is the story of the greatest genius - and the greatest villain - in the history of music. The Stone Guest features the swashbuckling lover-poet Don Juan in a love triangle with his fiery mistress Laura (the actual prototype for Carmen) and Doña Anna, the true love of his life, (with far more action in a few minutes than in all of Chekhov's plays combined). And in The Feast in Time of Plague, revelers honor a fallen friend with poems and songs, in search of answers to the question: what do we do, when there's nothing we can do? 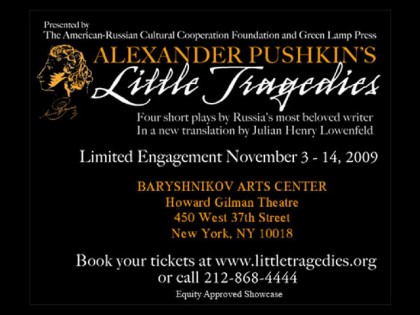