Full text of the review below:

by Christina Lodder - "THE FIRST scholarly study of the innovative work of the architect Lazar Markovich Khidekel (1904–86), this book is a most welcome addition to the literature on the Russian avant-garde. Khidekel is not well known, but he played a vital role in applying the spatial and formal principles of Suprematism to architecture. Indeed, his Workers’ Club of 1926 was the first truly Suprematist architectural design. The story of how it came to be produced makes fascinating reading.

Khidekel was a fifteen-year-old student when he first came into contact with Kazimir Malevich, soon after the artist arrived in Vitebsk in November 1919 to teach at the city’s art school. Subsequently, Khidekel became one of Malevich’s most steadfast followers and a leading member of UNOVIS (Utverditeli novogo iskusstva, ‘Champions of the New Art’), the group that Malevich set up in early 1920. It was dedicated to promoting Suprematism, introducing its language of coloured geometric forms against white grounds into all aspects of the everyday environment, and incorporating its features into all areas of design, from ration cards to posters, from textiles to buildings. The group shared Malevich’s aspiration to reconfigure the world as a Suprematist utopia and create a Suprematist architecture.

Khidekel rapidly became one of Malevich’s most valued disciples and assistants, a member of UNOVIS’s creative committee and responsible for running the architectural and technical department after El Lissitzky left Vitebsk in late 1920. From 1923 Khidekel worked with Malevich at the State Institute of Artistic Culture (Gosudarstvenny Institut Khudozhestvennoy Kultury, or GINKhUK) in Petrograd, while studying architecture at the city’s Institute of Civil Engineering.

Khidekel’s design for the Workers’ Club of 1926 fused a Suprematist approach to form and space with pragmatic concerns for function, materials and construction methods. While its asymmetrical massing and use of cantilevering were reminiscent of Malevich’s own experiments with architectural form – his planits and architectons – Khidekel’s design could actually be built. Yet Khidekel also explored architecture’s spatial potential in sketches for dramatically cantilevered, intersecting and asymmetrically articulated rectilinear structures, which were intended to be raised above the ground on supports, or to inhabit cosmic space, such as his designs for a city on piers (1926–28) and an ‘Aero-city’ (1928). These visions remained firmly confined to the drawing board, especially after Khidekel was forced publicly to recant his previous attachment to Suprematism in 1934 and comply with the stylistic dictates of Stalinism. From then on his architecture conformed to official demands, although echoes of Suprematism sometimes remained. The school on Gorokhovaya Street in what was then Leningrad (1938), for instance, is in a Neo-classical idiom, although the site plan recalls a Suprematist composition with geometrical elements distributed along a single axis. During the thaw in East–West relations under Krushchev, Khidekel was encouraged to revisit his earlier experiments, producing numerous spatial paintings and innovative designs, including a project for a museum dedicated to the rocket scientist Konstantin Tsiolkovsky, who had been an inspiration for UNOVIS’s cosmic aspirations.

All this is documented in this superbly illustrated and informative volume, which makes full use of material preserved in the family archive. It is the first major monograph on Khidekel in English and provides a riveting discussion of the architect’s creative theory and practice. The 115 large colour plates provide a visual history of his development from Cubo-Futurism and Suprematism (e.g. Yellow cross; 1923) to projects such as his design for the stage at the Red Putilov Workers’ Club in Petrograd/Leningrad (1924) and later works. The book also includes a chronology of thearchitect’s life and various documents and theoretical statements that he produced during the 1920s.

The essays act as an illuminating complement to this visual material. Regina Khidekel provides a general introduction, while Tatiana Goriacheva discusses Khidekel’s work at UNOVIS, and Charlotte Douglas explores the cosmic dimension of Suprematist architecture. Alla Rosenfeld, Boris Kirikov and Margarita Shtiglits examine Khidekel’s architectural work of the 1920s and 1930s, including the Club for the Red Sportsman’s Stadium (1927) and designs for the socialist town of Dubrovka (1931–33) – sadly destroyed during the Second World War – in which Suprematist formal concerns were combined with a Constructivist approach to material and function. Finally, Constantin Boym and Magdalena Dabrowski discuss Khidekel within international artistic and architectural contexts. This book is essential reading for anyone wishing to gain a fuller understanding of Malevich, UNOVIS, Suprematist architecture and the achievements of the Russian avant-garde."

The Burlington Magazine (UK) is the world's leading monthly publication devoted to the fine and decorative arts. It publishes concise, well-written articles based on original research, presenting new works, art-historical discoveries and fresh interpretations. The magazine is both an enduring work of reference and a running commentary on the art world of today – as well as editorials on topical issues, it features authoritative reviews of all important books and major exhibitions.

Other reviews of the publication:

Lazar Khidekel's Landscapes at the End of the World by Cruz Garcia and Nathalie Frankowski, WAI Think Tank, The Avery Review, Climates Edition 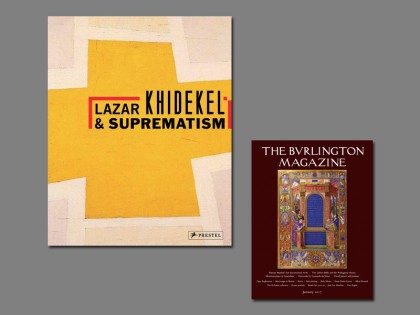